Since August 15, 2018, I have spent countless hours planning, preparing, and training for a bicycle ride from Major League baseball game to game, from coast to coast, to raise awareness for veterans' mental health. My overall goal was to communicate a couple of messages to other veterans. First, I want everyone to understand your mental health is just as important as your physical health and needs to be maintained the same way. Staying physically active is a vital part of keeping your mind strong. However, even if you are as strong as an ox physically, we all still need to lean on each other for help mentally and that does not make you weak.

In recent weeks it was becoming increasingly clear that all my hard work was going to have to be greatly adjusted or wasted because of the Coronavirus pandemic. In late March President Trump and the major sports executives had a discussion and it was announced baseball with fans in the stands won't happen until at least August. At that point, I knew the stadium to stadium ride was not going to be feasible but I wanted to still get the message out there and hold up my end of the bargain as best I could to those of you who had already contributed.


With my spirits being crushed not only about the ride but in the current state of our country, socially and financially, I knew I can't be the only one who is feeling a bit down and I wanted to change that. Aaron and I had already been planning to partner with National Veterans Foundation for the ride across the country. After talking to them and finding out they were not being deterred by COVID-19 I wanted to get the word out to others that this great organization is still there during these hard times to help any vet who needs it in any way.

A plan came to my head and after speaking to a couple of my biggest supporters I decided to set an example for other vets that there are still ways to get out and exercise while enjoying the fresh air and sunshine all while following social distancing guidelines. Also, I wanted vets who weren't aware to know, if you don’t know where to turn, National Veterans Foundation is always there to help.
I decided riding 300 miles in three days would be a good challenge for me. After scrambling to put together the needed components I checked the weather and made my mind up to take off Saturday morning April 11, 2020, into a slight breeze which was supposed to turn and be from the north, pushing me by day 2. 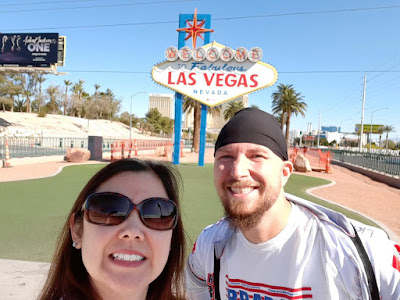 My PTSD often manifests itself in the form of anxiety which amongst other things means I get myself far too wound up about matters that don't need to be a big deal which sends my body into fight or flight mode several times daily. By 9 am Saturday I was in well into fight mode with my body tense and my mind racing already as my wife Jessica gave me a ride to meet with the media at the launch point, the welcome to Las Vegas sign. After nervously letting them know that I wanted to do this for other vets and to support National Veterans Foundation and it wouldn't have been possible without the help of Darryn at River Mountains bike shop, I started peddling toward Santa Monica pier at 10 am.


Coming out of Las Vegas into a slight uphill with a light breeze in my face was a challenge right off the bat but I knew it was nothing compared to the climb I was about to make after I crossed the state line. At noon I stopped at Seven Magic Mountains and took a couple of selfies with the brightly colored oddly stacked rocks in the middle of the desert. Jean and Primm Nevada both provided some motivation in the form of Old Glory which got my blood flowing for the climb. However, all that motivation was no match for this beast. I ended up walking up parts but never gave up.

At 730 pm I reached my planned sleeping point in Baker CA, just after sunset. Knowing the rest wasn't going to be easy either I knew it was important to get some rest. I spent most of the next five hours just laying there in the car nervously going over the details of the next couple days in my head until shortly after 1 am.