"How to Pick the Perfect Bracket"

Everyone wants to pick the big upset. It’s fun to impress your friends and competition by being right but, is that what’s important to you, or are you interested in winning your pool?

Since 1985 when the tournament went to the 64 team bracket format, every year there are multiple double-digit upsets. If you can pick one of them correctly, the higher the seed, the more high fives you will receive. The problem is high fives don’t buy beer!

When picking your bracket, the first and most important thing to remember is picking upsets by 13 seeds or higher rarely pays off. This is because even though you look like a genius at the time, your Cinderella will most likely still be playing above their heads in the next round as well. Expecting them to get to the sweet 16 is just asking too much. In addition, when you pick the 13 or higher you have now eliminated a top 4 seed that is more often than not, going to make it to the sweet 16. As a result, you’ve effectively lost yourself two games by trying to outsmart the room. This is especially true for the 15 and 16 seeds as only one out of the nine of them to win a first-round game has ever made it to the sweet 16.

Like everyone else, you remember the big 16 over 1 upset from last year and you want to be ahead of the curve this year. Some of you might even be able to name the eight 15 seeds that have beaten a two, and everyone remembers a few of the 21 14 seeds and 28 13 seeds that have made it out of the first round. The thing you need to realize is you only remember them because it's rare, in fact, your odds of being right are about 1/16. The cost of being wrong just does not outweigh the reward for being right because if you are wrong on your guess, not only did you lose the one you picked, but also the one that actually happened. If you want to pick a 13 seed or higher you better have some good information or be playing for bragging rights, not to win.

If your goal is to win don't bother picking one! That being said the odds are in favor of one of these 16 overwhelming underdogs pulling out the miracle each year, so if you want that perfect bracket, you’ll probably need to pick one. If you believe distraction can play defense against a superiorly skilled team, then take Yale as a 14 seed but, don’t expect much credit because right now, it’s the cool thing to do.

10 – 12 seeds are a little trickier. This is where your bracket can be busted or you can take the early lead. Amazingly all three of these underdogs have a very common win percentage in the first round. All three are separated by just 5% and according to history; slightly over one out of every three of them will pull off the upset. With there being 12 teams with a 10 11 or 12 seed in the tournament each year, four of them will advance on average. I like Liberty, Murray St. and New Mexico St. each to advance from the 12 line. I know its cliché to pick the 12 versus five upset but, after zero of the 12s pulled it off last year, for only the fifth time since 1985, I’m figuring they will make up for it this year. Florida from the 10 spot rounds out my 4 for this year. The two popular upsets that I didn't take from this section seem to be, 12 seed Oregon who has gelled well after losing their all-star Bol Bol early in the season, and 11 seed St. Mary's who faces last year’s champion, Villanova.

The eight/nine match-up is, as expected, a 50/50 proposition over time but the good news is even if you are wrong you don’t have to worry because all but 1 time in history the winner had to face the one seed in the next round anyway. If you are aren’t going to take the time to break the matchup  down, I recommend strategies such as: Which team’s mascot would win in a fight? Which teams primary color is your favorite? Which team has the best looking cheerleaders for the opponent to be distracted by? Or there’s the tried and true flipping of a coin. You can pick your favorite of these and feel good knowing you’ll most likely fair just as well as I did after hours of research.

That being said the two nine seeds I like are Washington and UCF. Utah State hasn’t seen a defense like Washington’s all year in the mountain west and has played the 85th toughest schedule in the nation to come up with their 28-6 record. UCF is a veteran team with a 7’6” giant and this time of year experience and size can quickly take over a game.

Now that I have explained how to get your bracket off to a perfect start the rest is up to you. I will post my bracket and you can feel free to copy as many of my winners as you like. In addition, I will be posting more of my thoughts about this year’s field and seedings on Thursday before the real madness starts. My predictions for winners round by round will be posted before the tip-off of the first game each day throughout the tournament. Be sure to check back often. Who knows, I may even throw out a couple winning bets before the championship is played on April Monday 8th. 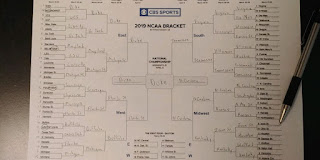