Thanks for the World Series title Bryant, Russell, Lester, Schwarber, and Heyward, but, buh bye. The time has come to blow up the Cubs roster!

My fellow Cubs fans, I know it is hard but, we have to let them go. Instead, I keep hearing Maddon has to go. I always say when a coach/manager is on the hot seat, do you have a plan to improve at the spot? If the answer is no, then stay the course. Maddon took a perennial loser in the Rays to the World Series, and then managed the Cubs to their first title in 108 years. If Theo Epstein is thinking of hiring someone off the coaching treadmill, then his resume better look at least that good. If Maddon's voice has gone stale in the clubhouse, new players will fix that. If the relationship with Maddon has just deteriorated beyond repair, then please give David Ross an offer he can't refuse! 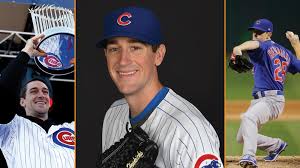 Kyle Hendricks is an experienced adult to lead the pitching staff into the future. The value in his contract is undeniable and his style is something young pitchers can learn from. As for the rest of the staff, Lester is obviously the team ace at this point but it's time for a new younger model that can throw the ball to first base. Dervish isn't a bad pitcher but his ridiculous contract blew my mind the day it was signed and he hasn't done enough to prove me wrong, therefore, the 20 million per just not worth it. Hamels is a free agent who will get more money than his services are worth. Quintana's option should not be picked up unless it is to trade him. As for the bullpen, bye Felicias; sorry strop, you too.

With the exception of Javier Baez, Anthony Rizzo, and Kyle Hendricks everyone else can go. Javy is not only one of the most talented players in the league but he's even more of an intellectual asset than physical. With him teaching a new cast of young eager guys they'll be in good hands. Anthony Rizzo is a born leader who has been through the wringer in life and on the field. His head down nose to the grindstone attitude makes him a great centerpiece to build around. All of the other position players under contract with the Cubs beyond 2019 should be on the trading block!

It's time for Grandpa Rossy, our three leaders, and the young bloods, starting with Hoerner, to lead us into the future!